back to the midwest...

A lot has happened since my last post. Some highlights:

1. I left Beer Sheva and went to Haifa, which is in the north, and free of rockets. It was glorious. I was spoiled by an Israeli family, hung out with fellow Beer Sheva refugees, and studied a lot. Here's some classmates sitting down for one of our nightly family-style dinners. It was so good to get away, even when it meant squishing eight people into a three bedroom apartment. 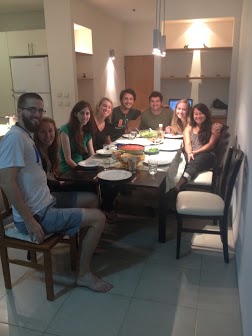 2. The administration cancelled the rest of my classes, and I decided to return home, since classes would not resume until after Christmas.

3. Right after booking my flight, a ceasefire was called. If you weren't keeping up with the news, Jon Stewart has a great summary of the conflict that had me rolling on the floor laughing. You can find it here: http://www.thedailyshow.com/watch/mon-november-26-2012/conflict-in-the-gosling-stripped

4. I returned to Minnesota and promptly turned into an icicle. Who knew it only took four months to completely lose all tolerance for real winter.

While the temperature difference hit me first, I'm surprised by how many differences there are between Minnesota and Israel, especially in my reactions and behaviors. For instance, I've been told by several people since returning home to stop yelling. I have been speaking at that decibel the whole time I've been away, and I could go louder. Also, I have difficulty speaking English while buying something. My first assumption is that I need to speak Hebrew. The girl who sold me a pop at O'Hare did not appreciate this.

Finally, I'm having a lot of difficulty in grocery stores. In Israel, people tend to go a little crazy in the grocery store. I've seen pushing, shoving, name calling, and cart bashing. The worst part is trying to get in line to pay. There's no such thing as 'I was here first'. It's all about 'I'm not letting anyone get in front of me.' So when I went to the local Cub to pick up a few things, let's just say my Israeli aggression was not appreciated by the other shoppers, who prefer a passive-aggressive approach (smothered in Minnesota nice, of course). I suppose I'll readjust over the next few weeks, just in time to go back to Beer Sheva and relearn how to act Israeli.